I’m on toes, kids had to rush to school, followed by hubby. I have to sit on my workstation for my today’s work, a family relative calls in between, so while turning the paratha on tawa which is to be packed for tiffin I speak to her with a twisted neck, anyways.

Finally, the school bus arrives and off they go, now is the turn for healthy breakfast for hubby which is boiled and sauteed and again comes a call from the dear maid that she will be late, okay all in. Office wala goes to the office with punch packed breakfast of sprouts and juice and fruits. I may get late now as my time is ticking. I just put the pot on flame for a cup of tea that will give me added energy to move ahead in the day. I realize my phone battery is about to drain so I plug it in its charger and I pour my tea in a cup and sit with my energy charger for few minutes of solace, while in the meantime the desktop is started ON and papers all collected for today’s editing and submissions.

Suddenly another phone rang and I’m in no mood this time to pick the call as the phone is already draining and I let it ring while I sip my tea with the paper for editing in my hand. The tea gets over and I hurry towards my desktop for replying my mail. AGAIN, the phone rings and I with who’s this tone go to pick, the phone is still just 7% charged. I saw who’s that and it was an unusual name on my screen which is not saved in my phone book. I tried hard to recall have I ever saved any name with this initials and came to the answer NO, so was it a prank call, hoax calls, private number or what?

Confused I was still holding the phone in my hands to pick or not to pick? And with loads of questions in my mind I pick the number which said “GOD”, you mean really? I said a slight HELLO which was maybe not even audible to me and there was a silence. I thought maybe I should cut the phone as I was afraid too, and after a long pause came a magnetic voice calling my name, oh man really am I known to the superpower, no ways.

I was afraid still replied back asking who’s that?

The voice said you called me you tell?

I was confused, when did I dial this number, was about to cut the phone thinking this seems to be a hoax call, and suddenly the voice said remember yesterday you thought of me and said I want to speak to God if I get a chance, then only your call had come but since you were busy so thought will call you back when you get free, which I know you never are after all you a mother.

I was feeling shy and confident at the same time. What to say now?

He asked me to tell what did you want to say to me? what do you want to ask me? I’m here to hear you.

I was in shock, surprise, happiness, confusion oh god, so many emotions at one single time.

I can’t even say I need something or not, maybe no I’m happy for what God had given me in life, agree sometimes one is disgusted or irritated and play the blame game but its temporary. It was like Ginnie asking me with a wish to wish…

Should I ask God to join for a cup of tea, or should I invite him for dinner? It’s a male voice so which God was he? Lord Ganesha, Lord Shiva, Lord Krishna oh God who are you. You are the supreme power and I’m acting so stupid.

I gave myself a minute to keep my calm. I regained my senses and thought again about my present scene. Why was I wasting such an important moment in confusion? Why can’t I talk to the supreme deity whom I always prayed, complained, cribbed, wished and worshipped? Was it so hard? No, I can and I will.

I had all the reasons to talk and Thank him. I have blessed 10 yrs back by Lord Shiva on Mahashivratri with his blessing in the form of a prince charming in my family.

Shiva the deity of power, the purn brahman, Adiyogi, Mahadeva, Bhairava, Mahakal, Vishwanath, trasnformer….endless names he has. Since then I’m passionate about Lord Shiva, and never miss to thank him. I even named my prince on his names, Power of Sun. He is not materialistic god, who adorns a serpent instead of Jewellery in his neck.

And saying this I visualized him on the other side of the phone. Slowly bringing myself to the present I replied Namaskar Lord Shiva!

Was I dreaming? No, It was for real, we were chatting and discussing why and what of Life has offered. I thanked for my present life and family and thanked especially because Lord spared time for me today. I did get angry for struggle I went through in rough times in my initial years of life, but maybe he had a valid reason for it and that was the reason I’m what I’m today. Maybe the choices were wrong so he mended them now. Maybe my sketch was not perfect so he repaired and blessed me with new painting on a new canvas. Bhakti can blossom in either way.

I was today thinking of those movies wherein they showcase that God has come to save or guide the human and I was experiencing it myself. It was not an accident or coincidence, I was as it is searching for my existence and soul and I found him.

I belong to a family of traditions and festivals was it the reason he came to me? No point in guessing and spoiling the moment.

We again went back to discussions about nation, international, brahman, universe, cultures, kids etc. and as a Guru, he replied and explained to me with calm. The Secret was finally working. when you want something the whole universe conspires to make it happen, yes it’s my favorite quote which had turned true today.

I don’t remember how long the conversation went on but when the bell rang and kids came home I was moving with a smile on my face. Kids were amused and I was still visualizing Lord in kids faces. The queries kids asked I thought were coming from Lord’s mouth only. Today I experienced That God is everywhere and especially in our hearts. 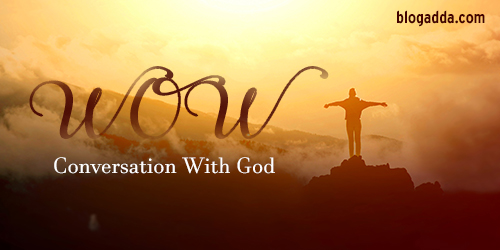